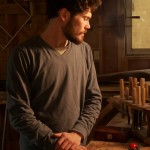 Philip’s predominant medium is working with wood, and he has a fascinating with working with stone. Philip has been practicing his craft for a decade and has been showcasing his works since 2009; he has participated in nearly 20 exhibits, throughout New Brunswick, Nova Scotia, and even in Ottawa, Ontario, and has even displayed his works at the Buckland Merrifield Gallery. He has been the recipient of various grants and awards. Philip was an instructor for carving workshops at the Saint John Arts Centre and Hooper Studios.

“Stone has traditionally been the dominant medium of sculptors through the ages, presumably due to its longevity. This is the foremost reason that I am intrigued by stone and would like to gain experience with it.”