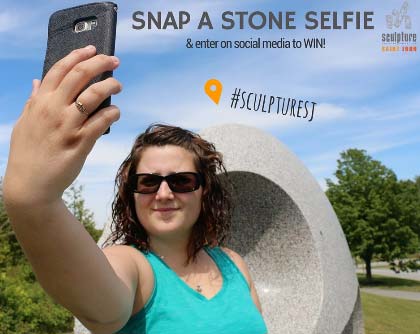 The winner will be notified by Direct Message and announced at the opening of Sculpture Saint John Thursday, August 4, 2016.

Contest starts at 7:00 am Friday July 1, 2016 closes at 5:00pm Sunday July 31, 2016. Sculpture Saint John will not be responsible for entries that are lost, late, delayed, untagged, incomplete or misdirected. An entrant must be a resident of New Brunswick, 18 years of age or older to be eligible.

By participating in the Contest, each entrant agrees to be legally bound by these Rules

i. The photo is original to him/her and that the entrant has all necessary rights in and to the entry and photo to enter the Contest;

iii. is not defamatory, trade libelous, pornographic or obscene, and further that it will not contain, include, discuss or involve, without limitation, any of the following: nudity; alcohol/drug consumption or smoking; explicit or graphic sexual activity, or sexual innuendo; crude, vulgar or offensive language and/or symbols; derogatory characterizations of any ethnic, racial, sexual, religious or other groups; content that endorses, condones and/or discusses any illegal, inappropriate or risky behaviour or conduct; personal information of individuals, including, without limitation, names, telephone numbers and addresses (physical or electronic); and/or any other content that is or could be considered inappropriate, unsuitable or offensive, all as determined by the Sponsor in its sole and absolute discretion.

The winner will be notified by DM and announced at the opening ceremonies of Sculpture Saint John on Thursday, August 4, 2016. Entrants can submit as many photos as desired; only one prize will be awarded. The prize is non-transferable and must be accepted as awarded, without substitution. Sculpture Saint John reserves the right, at its sole discretion, to substitute a prize with another prize of equivalent or greater value if necessary for any reason. Prizes can be claimed upon winner being notified of winning prize. All federal, provincial and municipal laws and regulations apply.

If for any reason the Contest is not capable of running as planned, including tampering, unauthorized intervention, fraud, technical failures, or any other causes beyond the control of Sculpture Saint John which will corrupt or affect the administration, security, fairness, integrity, or proper conduct of this Contest, Sculpture Saint John reserves the right at its sole discretion, to cancel the Contest